How to play conkers

If you take a walk through the Museum’s woodlands you’ll see an abundance of shiny, brown conkers, scattered among the fallen, crunchy autumn leaves near the dell. If I pass these horse chestnut trees with my 5, and 7 year old, they get very excited and begin to fill their pockets with conkers. They enjoy it even more if they get to peel the prickly casing open to uncover the encased conker, and there is further excitement if, there is multiple conkers to be found inside. My husband, an avid conkers player in his youth, has taught this historical game to my children, and they love it. 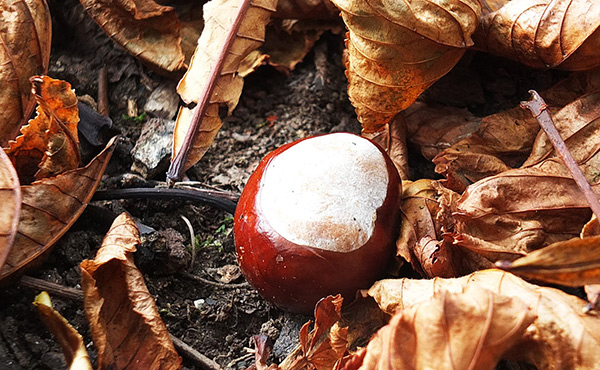 The fruit from the horse chestnut tree earned the name conker from the traditional game of conkers, which was played in the autumn months by many generations of children, often in the school playground. The game is played by two players, each with a conker threaded onto a piece of string, who take turns striking each other’s conker until one breaks.

According to my good friend, Wikipedia, the first mention of the game is in Robert Southey’s memoirs published in 1821. He describes a similar game but, played with snail shells or hazelnuts. It was only after the 1850s that using horse chestnuts was regularly referred to in certain regions. The game grew in popularity in the 20th century, and spread beyond England. Sadly, the game is not played so often now, due to health and safety concerns in schools.

How to play conkers

Find a nice, firm, undamaged conker and make a hole in the middle using a nail, small screwdriver, or drill. Thread a piece of string about 25cm long through the hole, and tie a knot at the end so that it doesn’t pull through. 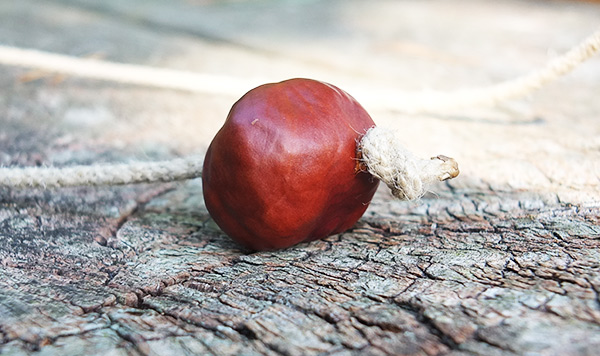 Each player has a conker on a string, and takes turns hitting the opponent’s conker. If it’s not your turn to hit the conker, you must let your conker hang down the full length of the string, keeping completely still, with the string wrapped around your hand. The other player, or striker, wraps his string around his hand in the same way, draws his conker back and releases it to hit his opponent’s conker.

If a player misses their opponent’s conker they are allowed up to two further goes.

If the strings tangle, the first player to call “strings” gets an extra shot.

If a player hits their opponent’s conker in such a way that it completes a whole circle after being hit – known as ‘round the world’ – the player gets another go.

If a player drops his conker, or it is knocked out of his hand, the other player can shout ‘stamps’ and jump on it; but should its owner first cry ‘no stamps’ then the conker, hopefully, remains intact.

The game continues in turns until, one of the two conkers is completely destroyed.

I found the above rules on www.projectbritain.com however; the game of conkers has different rules in different parts of the country. 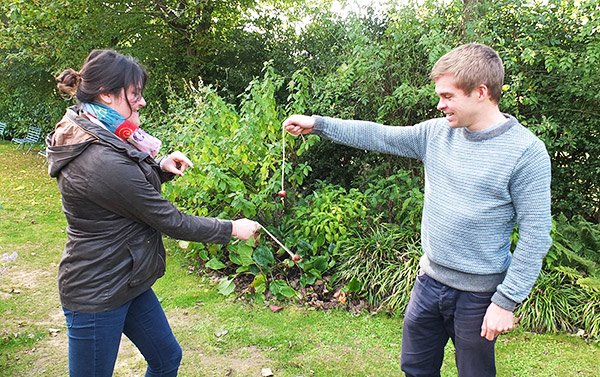 They learnt that it’s a lot harder to hit a conker on a string than you might think. 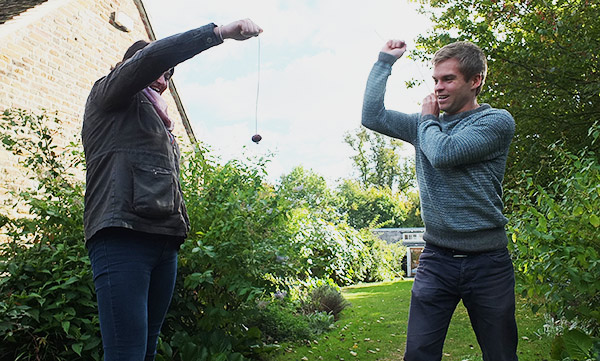 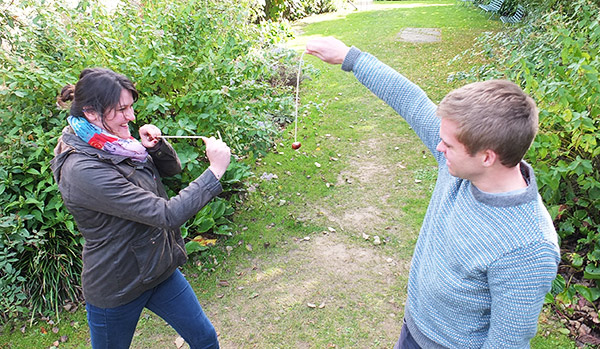 After much giggling, George managed to smash Yolanda’s conker and was crowned champion.