The Museum’s farm chickens are enjoying the milder spring weather having endured an unpleasant winter locked in their henhouse. This was in their own interest in order to protect them from the risk of catching avian influenza which was a problem in some European countries last winter.

Poultry farmers and other captive bird owners across the UK were instructed by Government agencies to keep all birds indoors from December. This was because of the risk from some migratory birds that had come from areas where avian influenza was found in wild birds. This restriction was only lifted in the Chalfont area this April. 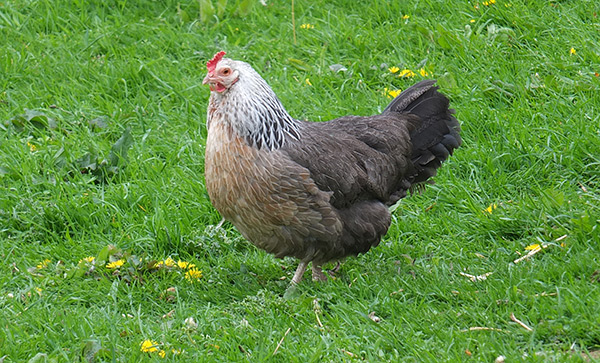 But the Museum’s chickens, Silver Grey Dorkings, were not impressed by their temporary incarceration.

“What a load of old nonsense keeping us indoors all winter” commented an anonymous spokeschicken.

“Totally unnecessary as we girls have nothing to do with those foreign birds, in fact any other birds. We have no time for idle chitchat anyway. Too busy meeting our egg production quota. We probably don’t speak their language anyway!”

“For four months we were locked away. We are a very rare breed and expect to be treated with the utmost respect. I bet they would not lock away the Museum staff in the old houses if tourists came to the UK with flu!”

“We Silver Grey Dorkings are one of the oldest breeds of poultry in the UK. We came to Britain with the Romans. They never locked us up and we are still around as a breed today as we are very hardy. Get to know us and you will find that we are a very docile breed, well except for some of the boys, and we are known to be good mothers and produce high quality white eggs.”

“We have been entering and wining prizes at poultry shows since 1845. That proves that we have a good pedigree. But we need to be able to range to keep ourselves in tip top condition. They expect us to lay lots of eggs and look presentable for the visitors but then lock us up for months. When we were let out, we had to hide ourselves from visitor stares at first. Being locked up isn’t good for your fitness but more importantly to us girls is how we look. What stress!”

“It does make us appreciate how awful it is for all those chickens in some farms that are always locked up, fed disgusting foods to make them lay loads of eggs, get fat and then be eaten. And worse still. What if they are seen in public. How awful they would look. How those girls cope with the stress! Maybe our lot is not so bad, although the ground has been a bit hard for plucking out those juicy worms recently.”

The much happier Dorkings are now enjoying their freedom in the enclosure next to the village green, although they may move soon to fresh pecking ground. They share a field with some young sheep, but have their own separate area fenced off area with an electric fencing to keep the foxes out.

“We are happy to be protected from those nasty foxes at night” continued the spokeschicken. “But we would rather it if we could roam the Museum grounds during day. I am sure those nice visitors would protect us if any foxes did come along. And visitors might share their sandwiches with us.”

The Silver Grey Dorkings, which typically live for six years, are provided with a suitable grazing area in fields around the Museum. They have plenty of space to roam in search of food including insects, grass and weeds that help provide a healthy diet, supplemented by special chicken feed. Free roaming chickens live longer than those cooped up permanently.

However, allowing the chickens to roam freely around the whole Museum site or farmyard during the day would not be practical from a health and safety perspective, both for the chickens and the visitors. And rounding them up at night in order to safely house them would be an additional chore for the busy farm team.

The chickens have an important role demonstrating their place in a Chilterns farm of the past. This now rare breed would have been a regular sight across the Chilterns many years ago, so the Museum is pleased to help preserve this breed. And the chickens do help to pay for their upkeep by producing a steady flow of eggs from March to October.

So everyone is pleased that the Dorkings are happy again In their healthy environment and equally as pleased that they had not seen the film ‘Chicken Run’ about chickens that escape a nasty farmer. Otherwise there might have been some very happy foxes around last winter!