Hi my name is Josh and I’m the new farm and site trainee. I am coming to the end of my first month at COAM and what a month it’s been. Over the past two years I’ve been studying a countryside management course which focused on wildlife and conservation, but I always have had a passion for agriculture specifically livestock which I’m really looking to get stuck into and hopefully learn as much as I can about. This picture to the below shows me with one of our resident rams, Darrell who is the father of this year’s lambs and a favourite of mine. In the future I would love to work with sheep and from the traineeship I hope to gain the skills to be able to do this. 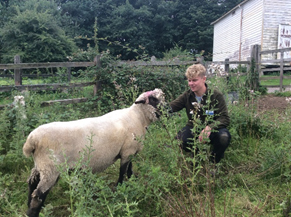 Another side of farming which I have had a chance to have a go at is the hay making process. The picture to the below shows me in the process of making a haycock which are made in order to create an egg like shape which will protect most the hay from bad weather or even morning dew. Having done nothing with arable farming before this was a new for me and was quite an experience as it was a blisteringly hot day. 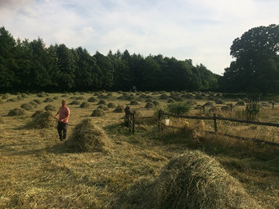 Something which has been one of my highlights of the month is being able to make two hurdles as shown in the picture. I have been involved with greenwood craft for just over two years now and so I know some basics but I had not made a hurdle before. These are used on the farm exactly the same as modern metal hurdles to pen up sheep when we want to do something with them, for example when we put them in the foot bath. They were traditionally used in the process of folding sheep which meant a shepherd could move his flock to different sections of fields along with his shepherd van. 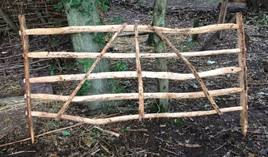 Overall my first month at COAM has been brilliant and I’m very excited to see what I will learn throughout my 18 months.