Reflections on the last 18 months of my traineeship

When I applied for the role of heritage buildings trainee I didn’t know quite what to expect. For a year and a half I had worked doing building repair work in Devon mainly using traditional materials such as cob and lime. I loved using my hands and the sense of history in the places so the opportunity to work in a museum dedicated to these old methods of construction seemed ideal to me. What exactly the museum would be like, however, I didn’t know! Fortunately the day long interview/ assessment, far less grueling than it sounds, gave me a great feel for the place and the people and what my role would be. Forward eighteen months and I can look back at what a great opportunity it has been to try my hand at such a broad range of trades and skills.

One of the first jobs was laying a chalk floor in the Iron Age roundhouse. We regrettably had to take up the old cobble floor as the cobbles were getting kicked up by lots of small feet and so the chalk was a replacement. It was a good lesson in how much the site and buildings are put under pressure by the frequent footfall (good for the museum of course) and how compromises, like replacing the cobble floor with chalk, have to be found. Some of the other jobs I carried out include thatching, blacksmithing, leadwork, lime plastering, and carpentry as well using the white earth material wychert, local to the area, to finish the garden wall of Haddenham cottage.

As part of my training I was also able to go on courses and work placements away from the museum. These included the green oak timber framing course at the Weald and Downland. It was fascinating and made me realise this was something I wanted to carry on with and learn more about. I later worked on an Elm barn in Hertfordshire, a cruck frame in Oxfordshire and learnt some timber repairs while at Orchard Barn in Suffolk and on placement in Twyford with IJP Owlsworth. So lots of good practise; unfortunately with timber framing it appears the more you learn, the more you realise there is to find out!

It was tricky at times to get the balance right between learning elsewhere and getting work done at the museum. However, the two things definitely complemented each other. For example I went on an electrical course which allowed me to do some basic wiring at the museum.

It also helped when I found myself faced with covering for the buildings manager at the beginning this year. This was always going to be a steep learning curve but what made it a more daunting prospect was that we had just started two fairly large jobs, repairing the sill beam of Thame vicarage room and replacing a supporting post in Skippings. Both were quite technically challenging jobs so the timber framing experience I had developed made it possible to tackle them. 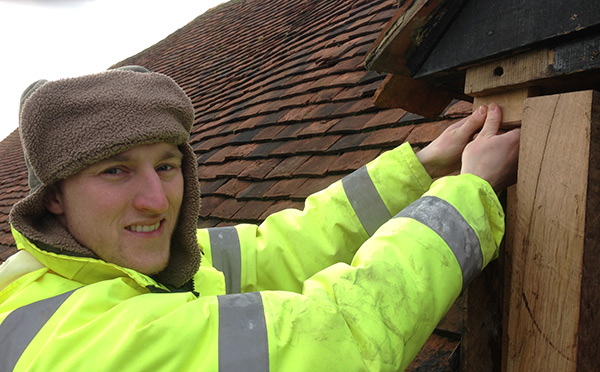 I ended up covering for more than three months and while it was difficult, it was definitely a high point for me being able to put things into practise and leading the team (who were excellent and very patient I should say!) with whatever jobs we had on.

In summary, it has been a really rewarding experience working at the museum. I’ve thoroughly enjoyed getting involved in everything, from timber framing to digging foundations and even setting up for the Halloween scary walk. My thanks to everyone here for making it so special.