A new volunteer for COAM

So a mild enquiry about sheepdog pups that might be available after Christmas resulted in me being told that an old friend of mine who is a top sheepdog trials man might have some puppies, he lived in Sussex so not too far. I called and had a chat telling him I wanted a pup after Christmas if possible. Unfortunately he didn’t have anything currently although he knew of a pup at a neighbours and his dog was the father. I expressed mild interest and asked for some details and pictures to be e-mailed to me. 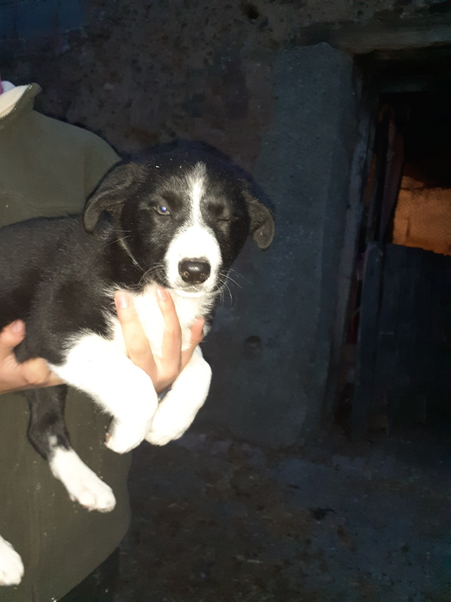 My old dog Ted was a rough coated, tri colour male dog and that is what we intended to get again as we liked that look, the puppy being offered was a Black and White, short coated bitch! Surely this would not be for us? The picture arrived, not the most appealing picture, they obviously weren’t into marketing!! She did however appear to be nicely marked.

Having established that she did indeed have two eyes I responded that we would like to see some more and a video if possible, inwardly I was not convinced. However when the better pictures arrived we were warming and had pretty much made up our minds to pay them a visit for a proper look, a visit to Sussex was quite appealing, it was a bit of a shock to find out that my old friend had moved to Devon when his neighbour sent the address of their farm!! So were we to go all that way just to see a puppy that was not what we intended to get and at least 3 months too soon. Suffice it to say it didn’t take long to have made arrangements to drive down and see her, stay overnight in a delightful little B&B called the Old Bakehouse in Chulmleigh Devon, go back and collect her the following morning and wend our way back home.

Our trip down was excellent and we arrived early afternoon to be greeted by the owner who led us to a farm pen, opened the door and out ran the sweetest little dog you could imagine, scooped up immediately by my wife Sue who exclaimed “we’re having her” My chances of a good deal had just gone down the drain! Our fate was sealed and after a very pleasant evening in Chulmleigh we found, ourselves back at the farm the following morning collecting our new charge. Money’s changed hands, papers sorted, a supply of her current puppy food obtained, popped in her travelling crate and on our way back home we went. Well talk about a change, our adorable soft little pup turned into a screaming howling wolf cub as she experienced car travel for the first time, we knew what to expect but with a 3-4 hour trip ahead it didn’t bode well. Fortunately after about half an hour she was a little sick, made some mess from a couple of other orifices and then settled down. The rest of the journey was quiet and Jess as she was now called was settling in to life with us.

Other blog posts by Steve

The circle of life
Jess the sheep dog at 13 weeks