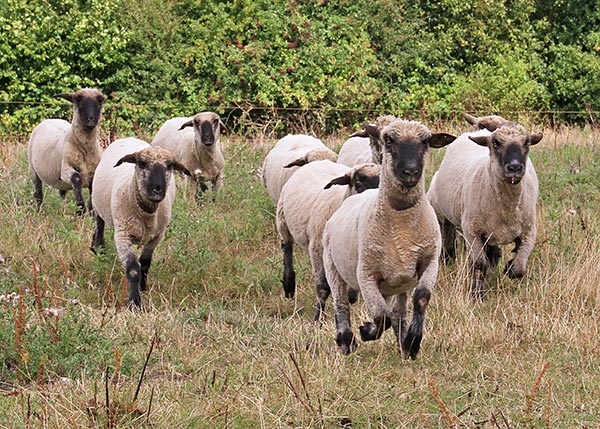 If you visited the Museum in the spring and walked in the Hidden Meadow, you would have enjoyed the proliferation of spring flowers. The meadow is however, an important grazing area for the Museum’s sheep and the Museum’s farm staff and volunteers spent much of the winter reducing the invasive scrub cover and erecting or repairing stock fencing. So the ewes with this year’s lambs have now moved into the Hidden Meadow to give other grazing areas a rest.

The impact of this is that the vista of wild flowers may not be as splendid for a while as the sheep munch and trample their way through the meadow. However, this is an important part of meadow management and grazing the sheep will help keep unwanted scrub growth under control which will help ensure future re-growth of meadow plants so we can enjoy the flowers again in coming years.

Properly managed grazing is essential for the health and welfare of the sheep whilst helping to maintain an appropriately rich variety of wildflowers amongst the grasses. The Hidden Meadow has not been grazed for over a year and it is this practice that helps to encourage wildflowers to thrive, whilst also providing time for vegetation born parasites that can be harmful to sheep, to die out.

Parasitic nematodes, spread through infected sheep faeces, can be a problem for flocks as the parasites migrate to the meadows grasses and plants. The sheep then ingest the parasite when grazing and the cycle continues if not dealt with effectively.

When moving sheep to pasture not grazed for over one year, it is firstly good management to ensure the sheep go there parasite free. However, it is also important to provide protection just in case any parasites have survived.

Prior to the flock being moved to their new home for the summer, it was necessary to protect each ewe and lamb, as well as the two rams which are grazed separately, with protection through applying an oral worming treatment. A nice job for the farm manager Conway Rowlands until he suggested that it would be helpful if some volunteers could also learn how to carry out the treatment. The fun of volunteering!

Three of us volunteers were happy to get involved. This required the application of the worming treatment solution by using a drench gun to dispense a measured amount on to the back of the animal’s tongue. This is where the fun started!

Being able to explain to children as to why they should take medicine gives you half a chance of success and this may work with some adults as well! But as the farm’s Oxford Down sheep have yet to make any serious attempt to properly learn the English language and to be fair, nor have the farm team been bothered to learn sheep speak. Therefore, you cannot reason with the sheep as to why you want to shove a drench gun in its mouth and ask it to behave reasonably whilst doing so.

The worming process is probably a straightforward task for the experienced sheep farmer, but for a volunteer doing it for the first time, an interesting challenge. So the task in hand required the capture of every ewe, lamb and err, the rams! Without a sheepdog in sight, this may have proved tricky. But with the rattle of the feeding bucket carried by the farm manager, the ewes and most lambs obligingly followed him pied-piper like into a holding pen joined by the rest of us rounding up the stragglers from behind. 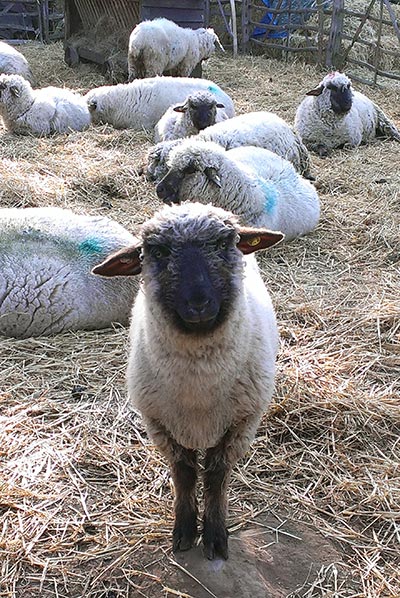 It was then time to catch the ewes one by one, followed by the lambs, and administer the appropriate amount of wormer whilst ensuring it was all swallowed.  The animal was then marked with a dye to ensure it did not get a second dose.

The ewes were wary as they had past experience of worming. As it was the first time for three of us volunteers, we decided that one person would catch the sheep and hold it securely whilst another would administer the dose and the other apply a marking spray to indicate job done.

The first sheep were not too difficult to capture as there was plenty of choice to be able grab one who was due the wormer. It became harder as the number of waiting candidates reduced and they would try and hide. The trick was not to let the target sheep think it was next as it would try and keep well away from you. So not looking directly at it and seemingly aiming for another animal whilst quickly and carefully changing direction and grabbing at it when it thought you had not noticed it worked well. This large breed of sheep certainly had the strength to put up a bit of a fight, well more of a frantic wriggle, but then quickly settled in most cases to receive the inevitable.

The lambs were by far the easier to hold still, even though they did not stop wriggling. Their speed, agility and ability to squeeze through small gaps between the other animals made it interesting.

The wormer dose was applied to the back of the animals tongue with the head slightly elevated to encourage swallowing. Squeezing the drench gun nozzle into the mouth was not too difficult whilst holding the sheep’s head firmly in position. But once achieved, the sheep would chew on the nozzle therefore keeping fingers away from the mouth was essential in order to complete the task with a full complement of digits! Marking the sheep was the easy part, but the three of us alternated the tasks to get experience of the whole process.

And then it was the rams turn. A more daunting task against two very strong brutes that seem to growl more than bleat! One ram had history of clearing the height of the fence when a previous catch had been tried. This time they were mere pussycats, although two of us holding them made it easier.

Visitors can still visit the Hidden Meadow which is on one of the Museum’s walking routes. It is always a nice area, whether grazed or not. And the sheep – they were none the worse for their experience and all but the two rams are enjoying the fresh and plentiful pasture in the Hidden Meadow.