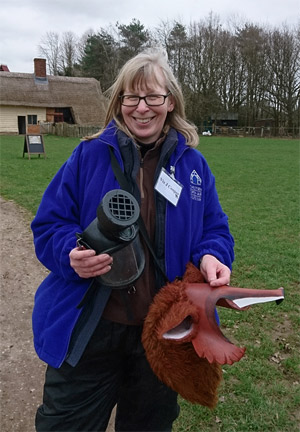 Vix J Cooper, known as workshop leader and farm volunteer Jane at the museum, talks about how her time at COAM gave her inspiration when writing her book Crazy Pets and Secrets Revealed. She says…

My senses are always given a treat by the wonderful landscape at COAM through the different seasons. This, plus time spent in the buildings, listening to visitors recounting their past experiences, and having a go at traditional technology and techniques is not only informative but inspires some of my writing too, such as regarding the impact of WW2 and traditional washing methods.

It feels a privilege earning the trust of the museum’s animals and getting to know their particular habits, likes and dislikes. The cats are usually the first to greet me when I’m on feed duties. They’re nicer than the cat in my story Crazy Pets and Secrets Revealed, despite them crunching rabbit by my feet in Borehamwood! The cows tolerate my random singing when I’m grooming Clementine, and the hens normally respond to my clucks. Often, after I’ve finished a morning feed, I’ll sit on the step to Borehamwood with a cuppa and watch the birds and clouds, rain or sunshine dancing across Hill Farm barn roof, or fallen leaves racing around the site.

Lambing by moonlight is magical with shadows of the clouds, trees and animals roaming. I’ve learnt to work out “who goes there” from the different eye shapes glinting and moving across the site for farm and wild animals. The quiet of the night amplifies masticating mouths, rumbling stomachs and belches of the sheep, as well as the hooting of owls and barking of deer. My own family groan when I, or the car, reek of iodine and worse when it’s lambing time. Post-midnight showers can become almost routine before crawling into bed after lamb – or kid – late shifts. While the ewes are reliably well-behaved, the same can’t always be said of the goats who can have me doubling up with laughter over their antics: Dotty refusing to go in the field so we engage in a tug of war with me holding onto her horns and her walking backwards; Crystal taking me for a walk, dragging me at the end of her lead or standing up on her back legs to eat foliage up a tree; and Dora climbing in the wheelbarrow I’m trying to get out of the field after refilling the hay feeder.

With many Coopers in the world, I added Vix to J Cooper because I admire foxes for their adaptability and I thought Vix, short for vixen, would be different. I originally wrote Crazy Pets and Secrets Revealed for children aged nine and above, but adults do buy it and anyone connected to the museum may just enjoy reading it to discover what and who inspired some of my characters and bits of the storyline. I’m currently writing a follow-up with the main character Hugo. I’ve also written a story, aimed at 3-7 year olds and currently with my illustrator, which should be published about September time. Traditional landscapes, plus my roles as workshop leader and forest school practitioner were certainly influential for this book. I’m restless if I go a day without writing, and special places such as COAM both sooth and exhilarate me.

Crazy Pets and secrets Revealed can be ordered from Amazon & other bookshops.