We have found a Nissen Hut! 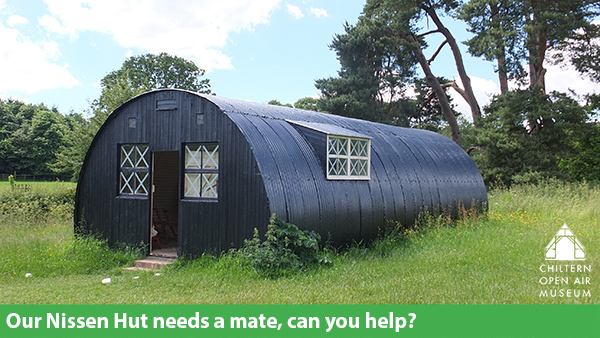 Thank you to everybody who responded to our campaign to find a new Nissen Hut.  We’re delighted to announce that our search was successful and we’re now seeking funds to re-erect our newest additions, which we hope to rebuild and interpret respectively as a WWI Nissen Hut and WWII-style NAAFI during the next two years.

Our mission is to rescue and re-erect threatened buildings, and each one is meticulously photographed and documented before being carefully transported here to the heart of the Chilterns, repaired, and re-erected.

The building will primarily be used as a much-needed education space for schools and the local community, and will have a WW1 theme to commemorate the centenary of the Great War.

Chiltern Open Air Museum is a registered charity no. 272381 and all proceeds go towards its valuable conservation work.