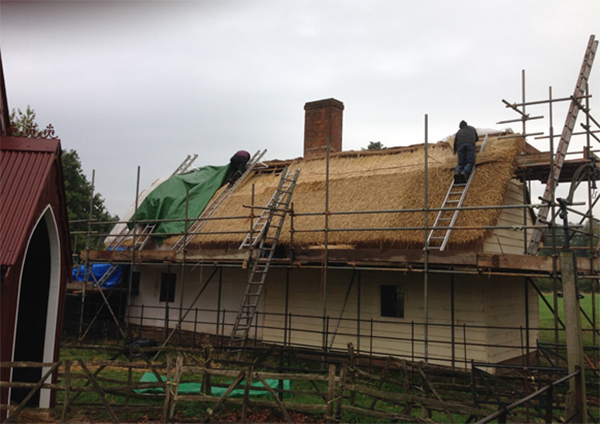 Master thatcher’s Mark and Roger have done a fine job transforming Leagrave cottage with a new coat of longstraw thatch. I had the opportunity to have a go at thatching I started on the ground, trying my hand at the art of yealming. This is a job a great many of the building volunteers shudder at the thought of, having yealmed some of the thatch for Marsworth.

For those not knowledgeable in longstraw terminology (and there is a lot of it, often particular to each region), the yealm is a bundle of straw about 13cm deep and as wide as the thatcher can happily handle – this makes up the basic unit for longstraw thatch that the thatcher fixes to the roof in courses.

Before I started yealming, Mark had already made up a large yealming bed of straw, dampened it, and placed a board on top to keep it a little compressed. From the bed, I pulled out handfuls of straw and placed them in front of the bed so that most of the stems were going in the same direction to make a smaller pile of straw about 10cm high. 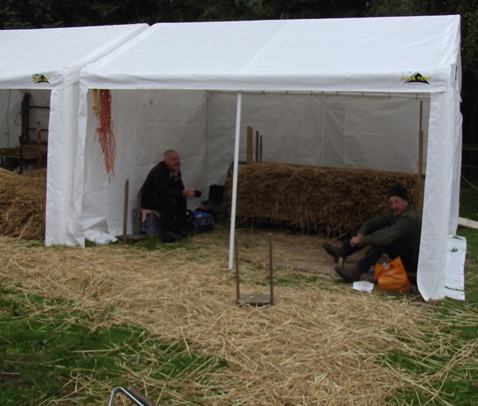 You want most of the ears on one side and the butts on the other but a slight mix is inevitable. Starting from one side of the smaller bed, I separated as much of the straw as I needed to make a yealm, and brushed the back of my hands through it to take out some of the smaller stems and leaves and make doubly sure the majority of the stems were going in the right direction.

When I was happy with how it looked, I picked up the yealm fairly loosely and gave it a tap on the ground so the end of mostly butts started at the same place. This is very important as this is the end that will be exposed on the roof and what you want to achieve is a smooth hole-free surface of thatch.  Any stems that don’t drop to the bottom when tapping the yealm you can picture as holes in the coat of thatch – not what you want at all!

The yealm is then stacked up into piles of four or five, which is called a bundle, and tied up ready to be taken up to the roof. Piling them up in different directions is enough to prevent the yealms from merging.

A tied bundle of four yealms

Straw is unlike most other building materials I can think of so it really took a while for me to understand what it was I was aiming for when preparing and fixing it in place. I only really understood the difference between a ‘good’ and a ‘bad’ yealm once I had compared fixing one of my early yealm attempts to fixing one of my later ones where I knew what I was doing. One was a patchy mess, with many holes; the other seamlessly (almost) blended with the thatch already in place. Essentially the work had been done properly on the ground so that I didn’t have to play around with the straw as much on the roof. It all sounds quite simple but, like any craft, takes a while to get a feel for and many a year to master.